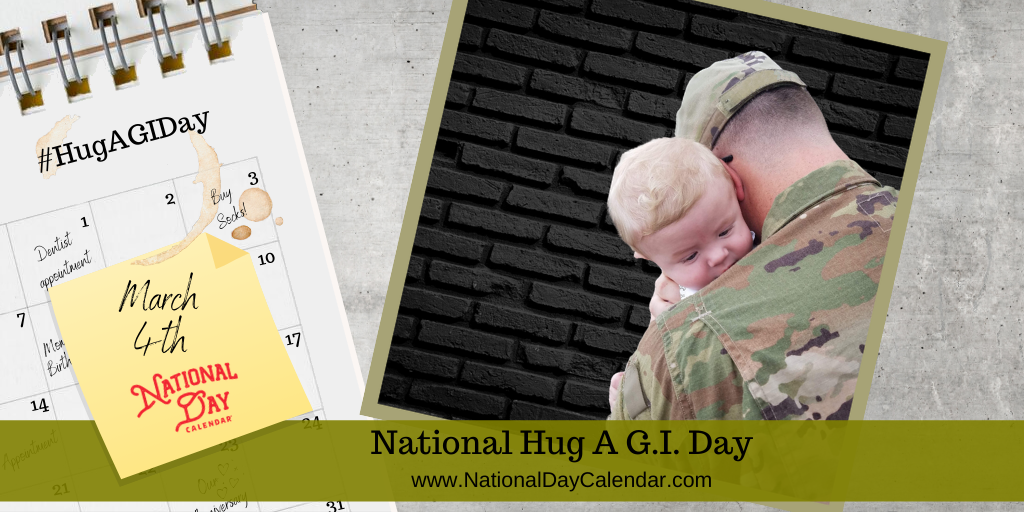 As the only day on the calendar that is mnemonically a military command, March 4th recognizes National Hug a G.I. Day.

Gather around your servicemen and women to give them a hug. It’s simply a way to show your support. With either a pat on the back or a hearty handshake, be sure to give both past and present G.I.s your appreciation. While G.I.s refer to Army personnel, the day encompasses all those who have served in the military. So, hug those Jarheads, Wingnuts, Squids, and Coasties, too!

Today the term G.I. is fairly commonly known to refer to those serving in the Armed Forces of the United States of America. How that came to be is a little less military protocol and more the American story.

It seems at the turn of the 20th century, G.I. was a notation used in supply records for galvanized iron. It was later used during World War I for German artillery shells made from galvanized iron.

Sometime during the war, soldiers started interpreting the initials as “Government Issue” or “General Issue”. By the time World War II came around it was starting to gain meaning as the generic enlisted man.

Not surprisingly, sarcastic usage among many servicemen was common, feeling they were just like any other Government Issued supply being mass-produced for Uncle Sam.

The term G.I. became more permanently etched in the American language when in 1944 President Franklin Roosevelt signed the bill that became known as the G.I. Bill; Servicemen’s Readjustment Act.

And then there was no going back when Hasbro trademarked their G.I. Joe as an action figure in 1964.

In 1996, Adrienne Sioux Koopersmith created Hug A G.I. Day. She selected the only day on the calendar that was also a military command to salute and celebrate the men and women who risk their lives for our country and freedoms. We have included the link to the original page for you.  http://adriennesiouxkoopersmith.blogspot.com/2013/02/hug-gi-day-1996-ask-style-celebrating.html

Q. What is the G.I. Bill?
A. The original G.I. Bill is no longer in effect. However, today’s G.I. Bill provides benefits to services members and veterans to attend college, university, trade school, or other training services.