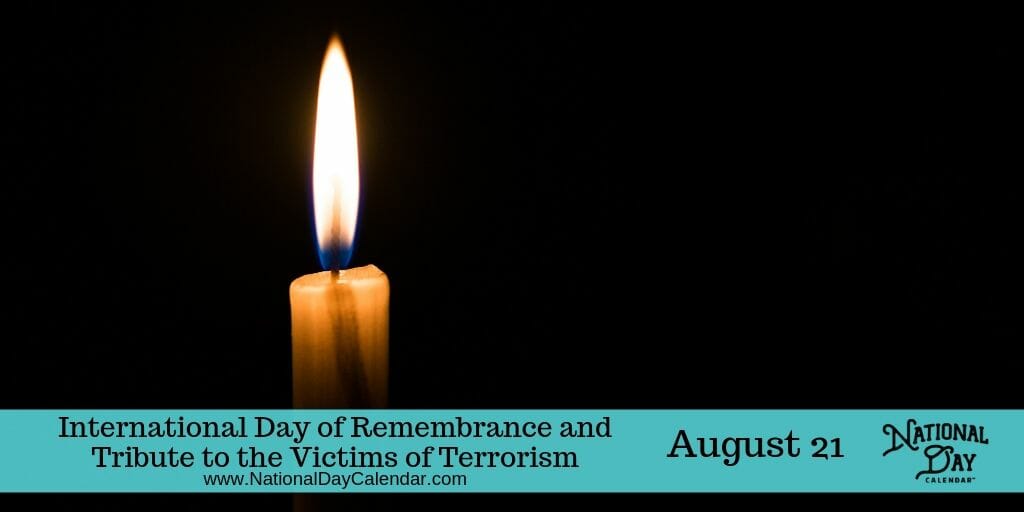 NATIONAL DAY OF REMEMBRANCE AND TRIBUTE TO THE VICTIMS OF TERRORISM

On August 21st, International Day of Remembrance and Tribute to the Victims of Terrorism honors the lives changed forever by acts of terrorism.

Victims of terrorism often feel neglected and forgotten when the aftermath of a terrorist attack fades. These victims struggle for their voices to be heard and their rights to be upheld. Many of them need financial, physical, and psychological help. Some of them lose loved ones. These terrorist attack victims frequently do not have the resources to recover fully.

Most terrorist attacks include political, ideological, or religious motivation. Some who commit these acts often feel they are victims of social injustice. They might also feel angry, alienated, or disenfranchised. No matter what the reason for terrorist attacks, many people suffer as a result.

While the common person doesn’t have the tools to stop terrorist attacks. However, you can do your part by trying to understand those who are different from you. Understanding one another does a lot to diminish hatred between different races or religions. Pause on this day to remember the victims of terrorist attacks around the world. Give to relief organizations that help victims of terror attacks. If you know a victim of a terrorist attack, be sure to tell them about the United Nations’ Support Portal.

In 2017, the United Nations General Assembly designated August 21 as the International Day of Remembrance and Tribute to the Victims of Terrorism. That year alone, nearly 75% of all terrorism-related deaths occurred in just five countries. These countries included Afghanistan, Iraq, Nigeria, Somalis, and Syria. The day was set aside to strengthen solidarity with terror victims in these countries and others.