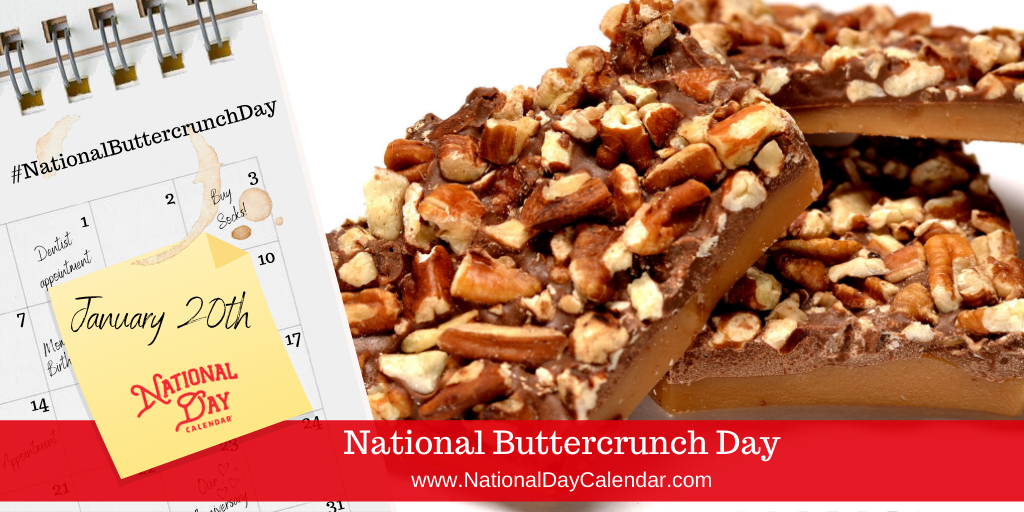 Buttercrunch is a combination of toffee, covered with chocolate. It has a crunchy texture and a caramel flavor. Variations on the recipe include toasted almond sprinkles.

When is National English Toffee Day?

Making buttercrunch calls for a good candy thermometer and some cooking experience. Creating the toffee involves caramelizing sugar at high temperatures, which requires precision, timing, and the right tools and safety techniques for a successful outcome. Follow recipes closely. The stage the sugar is supposed to reach (usually hard-crack stage) will determine when you remove the sugar from the heat. You also have to move quickly and safely. Sugar burns at 300° + degrees leave blisters and scars.

When you’ve mastered candy-making skills, the results are delicious and definitely worth sharing. Buttercrunch and other candy treats make terrific gifts during the holidays and throughout the year. It also stores well for a time. Keep it to serve over ice cream or add as a garnish to cakes and cookies.

January 20th Celebrated (and Not So Celebrated) History

The United States Senate amends and extends the 1875 reciprocity treaty with Hawaii securing a lease to Pearl Harbor as a Naval Base.

Irwin W. Cox registers the trademark for the steel-wool product called “SOS.” The initialism for the shaved steel wool saturated with soap stood for “Save Our Saucepans.”

The Wisconsin Cheese Foundation sponsors the making of the world’s largest block of cheese ever made. At midnight, the process began at Steve’s Cheese in a factory near Denmark, Wisconsin.

Researchers at the University of Massachusetts and Advanced Cell Technology announced the successful cloning of calves that may have produced medicinal milk.

The inauguration of the 44th President of the United States takes place. President Barack Obama becomes the first African American to serve as a U.S. president.

January 20th Celebrated (and Not So Celebrated) Birthdays

The American cartoonist created the well-known comic strip Little Orphan Annie. It first appeared in the Chicago Tribune on August 5, 1924.

During the Harlem Renaissance, Jessye earned international recognition as the first African American woman to direct a professional choral group.

The legendary actor and comedian earned critical and commercial success during a career that spanned more than six decades.

The conservationist lived and worked in the Kenyan wilderness. After raising a lion cub to be released back into the wild, Adamson wrote Born Free. The book was made into an Academy Award-winning film in 1966.

One of cinema’s most celebrated filmmakers, Fellini brought the world La Dolce Vita (The Sweet Life), 81/2, and Ginger e Fred (Ginger and Fred.) Fellini’s final work was La Voce Della Luna (The Voice of the Moon) which starred Roberto Benigni.

On July 16, 1969, the decorated Army pilot joined Neil Armstrong and Michael Collins aboard Apollo 11 for a historic launch from Cape Kennedy. Four days later, Aldrin would be one of only two people to set foot on the moon, the first being his Commander, Neil Armstrong.