National Pi Day on March 14th recognizes the mathematical constant π. Also known as pi, the first three and most recognized digits are 3.14. The day is celebrated by pi enthusiasts and pie lovers alike! Pi is the ratio between the circumference of a… Read more… National Potato Chip Day on March 14th celebrates America’s #1 snack food. Millions will enjoy their favorite chip this holiday. It’s a good thing there are so many to choose from, too! On August 24, 1853, an unhappy restaurant customer… Read more… 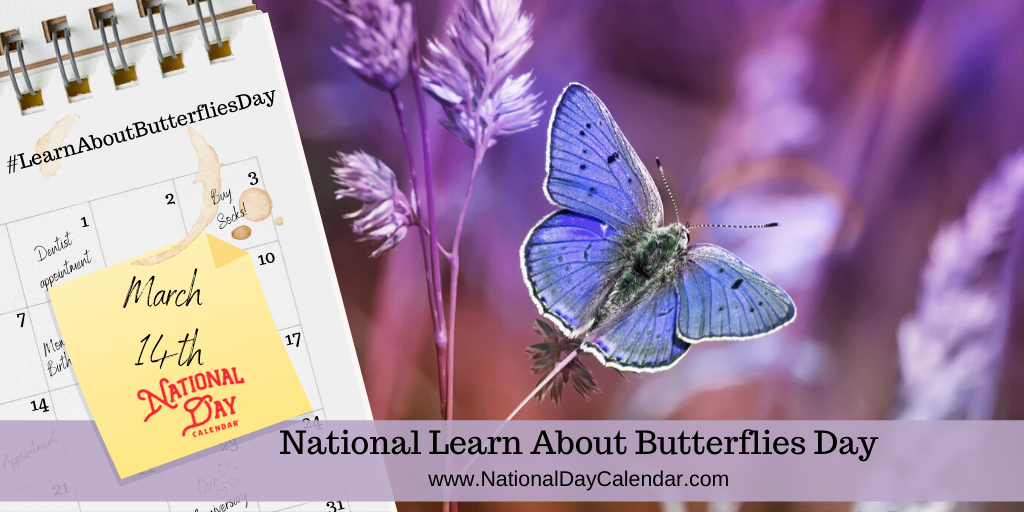 On March 14th, National Learn About Butterflies Day encourages us to look for a blur of color as butterflies begin migrating across the country. Each year the celebration brings with it an awareness of the varieties of butterflies and their importance to our survival. Spring and summer are… Read more…

Each year, National Napping Day recognizes our need the day following the return of daylight saving time. Not only does the observance encourage a nap, but it also reminds us that there’s no shame in taking one either. While preparing for the time change can offset… Read more… Everyone has a story and on March 14th, National Write Your Story Day challenges you to tell your story in written form. You may think to yourself, “There’s nothing in my life to tell.” It will surprise you once you put pen… Read more…

Each year, National Children’s Craft Day on March 14th unleashes a boost of creative energy right in the middle of National Craft Month. The day celebrates crafting with children. By opening children’s eyes to the world of crafts, we spark their imagination, and… Read more…

In a large frying pan, heat oil over medium heat. Add garlic and onion and cook until union is soft (about 3 minutes). Add kale and spinach and cook until both are wilted (about 8-10 minutes). Remove from heat set aside to cool.

In large bowl, add cream cheese, mayonnaise and milk together and mix until smooth. Stir in carrots, salt, pepper and red pepper and mix well. Add Kale and spinach and mix until everything is equally distributed. Chill for at least 1 hour.

March 14th Celebrated (and Not So Celebrated) History

The United States Patent Office issues patent no. 621,195 to Count Ferdinand von Zeppelin for his invention of a “Navigable Balloon” which was also known as the Zeppelin.

Following the passage of the 16th Amendment, President Warren G. Harding becomes the first U.S. president to pay income tax. When a bill was introduced by the house in 1921 that would exempt the vice president and president from paying income tax, the President-elect expressed disapproval of the measure.

The American Society of Civil Engineers elects Elsie Eaves as an associate member. She is the first woman elected to the society.

The FBI publishes its 10 Most Wanted Fugitives for the first time. At the top of the list was Thomas James Holden. He was arrested 18 months later. Number three on the list was William Raymond Nesbit. Police arrested him three days later in St. Paul, Minnesota. Of the ten, all but one were captured within two years. The remaining case was dismissed eight years after the list was published.

March 14th Celebrated (and Not So Celebrated) Birthdays

In 1921, the German-born physicist won the Nobel Prize for Physics. He developed the general theory of relativity and had a profound impact on 20th-century physics and scientific theory.

The American bookseller and publisher is best-known for opening Shakespeare and Company in Paris in 1919. The bookseller attracted some of the 20th century’s most influential and respected writers including Ernest Hemingway, James Joyce, Gertrude Stein, Ezra Pound, and Janet Flanner. In her memoir using the name of her business as the title, she wrote about her experiences in Paris, including those of the authors.

One of music’s most esteemed legends, Quincy Jones began making music at a young age. By the 1960s he was earning Grammy nominations and in 1963 he won his first Grammy for Best Instrumental Arrangement for his jazz song “I Can’t Stop Loving You.” Only the British-Hungarian composer Georg Solti has more Grammys than Jones phenomenal 28.

The actor and comedian has been making us laugh for more than 40 years in movies like The Princess Bride, Monsters Inc., and Analyze This.

In her first Olympics at Rio in 2016, Biles brought home four gold medals and one bronze. However, she was already a World Champion before she arrived in Rio. Since then, Biles has tallied up a combined total of 30 medals making her the most awarded gymnast in the United States and the third in the world.