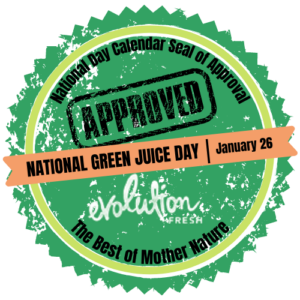 After finding that more than 50 percent of Americans break their New Year’s resolutions by the end of January*, Evolution Fresh founded National Green Juice Day in 2016 as a way to empower people to press ahead with their wellness resolutions by drinking a green juice.

*Survey was conducted by Wakefield Research on behalf of Evolution Fresh among 1,001 American adults age 18+ using an email invitation and online survey in December 2015.

The Registrar at National Day Calendar declared the day to be celebrated on the 26th of January, annually.