Every year on December 14th National Monkey Day celebrates unique characteristics of simians. The day also focuses on other non-human primates such as apes, tarsiers, and lemurs.

Monkeys, also known as simians, live all over the world. More than 260 species of monkeys populate Africa, Central America, South America and Asia. They range in size from mere ounces like the pygmy marmoset to the mandrill at a heavier 80 pounds and tend to walk on all four limbs. As a member of the primate family, they are considered a lesser ape. Most monkeys have a tail, though not all do. Monkeys are divided into two categories – Old World monkeys and New World monkeys.

Their personalities and habits capture the attention of humans on many levels. These intelligent mammals with opposable thumbs live in family groups, too. However, many species of monkeys are endangered.

HOW TO OBSERVE #Monkey Day

Discover more about these fascinating primates. Learn about monkeys who live through all kinds of weather in Nature’s Snow Monkeys. Disney’s documentary Monkey Kingdom about the monkeys of South Asia follows a family and shows us the social hierarchy that exists among the community.

Consider donating to conservation efforts. The World Wildlife Fund combats the destruction of rainforests which is vital habitat for the black spider monkey, a vulnerable species. 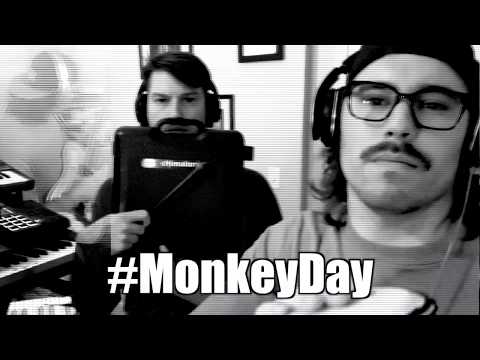 National Wreaths Across America Day is a movement to cover all veterans’ grave markers with a Christmas wreath. The observance is designated annually on a Saturday in December by Congress.

Remember. Honor. Teach. This is the mission of Wreaths Across America. By coordinating wreath-laying ceremonies at Arlington National Cemetery and other veterans cemeteries around the country, Wreaths Across America strives to remember our fallen heroes. The day honors those who serve. And it teaches our children about the sacrifices made by veterans and their families to preserve our freedoms.

Volunteer or donate by visiting www.wreathsacrossamerica.org. Use #WreathsAcrossAmericaDay to post on social media.

In 1992 Morrill Worcester and his business Worcester Wreath Company of Harrington, Maine, had a surplus of wreaths toward the end of the holiday season. Years before as a young boy, Worcester visited Arlington National Cemetery in our Nation’s capital. The experience reminded him throughout his life of the sacrifice some had made in order for others, including himself, to succeed and flourish.

Worcester made plans to lay the wreaths in honor of our Veterans at an older, less-visited section of Arlington National Cemetery. Volunteers stepped forward to help deliver and place the wreaths.

In 2007, the Wreaths Across America non-profit group was founded. Since then, the event has expanded to all 50 states to lay wreaths at veterans cemeteries to remember our fallen heroes, honor those who serve and teach our children about the sacrifices made by veterans and their families.

The French are known for many great recipes. Their food inspires travel to France for a taste of the authentic. Bouillabaisse tops the list of must-have cuisine while visiting France. The tasty stew originates in the port city of Marseille and is traditionally made using the bony rockfish, saffron, fennel seed, and orange zest.

In the culinary world, strong opinions bounce around about the proper ingredients for an authentic bouillabaisse. From the fish (typically red rascasse, sea robin, and European conger) to the wine (red or white), it is hotly debated. They even argue about the soup’s origins. Did a Greek goddess create the stew? Or does the credit belong to coastal fishermen who threw the ingredients together from unsold bony rockfish?

Regardless, cooks use a variety of fresh fish as their first step to a delicious bouillabaisse. It’s especially important if you can’t get to the south of France to order it made for you.

Travel to France to enjoy the authentic taste of bouillabaisse. No time? Visit a French restaurant near you or even try making it yourself. Explore a variety of recipes for bouillabaisse. For inspiration, watch Julia Child while she prepares her Bouillabaisse A La Marseillaise. Invite friends to join you.

We’ve also provided this Bouillabaisse Recipe for you to try. Add a baguette and watch a French movie for additional flair.

However you celebrate be sure to use #BouillabaisseDay to post your experiences on social media.

Undeterred by our research, National Day Calendar® continues seeking the origins of this flavorful holiday.

On December 14, National Alabama Day recognizes the Heart of Dixie.

The 22nd state to join the union, Alabama has played pivotal roles in U.S. history, scientific advancements and its magnificent landscapes attract visitors from far and wide.

Alabama enjoys 60 miles of shoreline along the Gulf Coast. While the coastal region is dotted with swamps and bayous, it also includes beautiful sandy beaches. Move northward from the coast, and the lowlands provide the fertile soils of the Black Belt, land that long yielded productive cotton crops. The Northern half of the state is dominated by the forested hills and valleys of the Appalachians.

As the original capital of the Confederacy until May of 1861 during the American Civil War, the small town of Montgomery set the stage for the secessionist government. Nearly 100 years later, the Civil Rights Movement would find a home and erupt across the state marching its vision to the rest of the country.

Bringing diversity to agriculture at a time when the boll weevil was wreaking havoc on cotton crops, George Washington Carver provided the opportunity for successful planting and harvesting of a legume that continues to be popular not only in the south but across the United States. The peanut brought new farming methods and agricultural stability to a suffering southern industry.

In Alabama, and all across Southern states, the meat and three will fill you up with more satisfying comfort food than you can find anywhere other than your mother’s kitchen. The restaurant style includes a mouth-watering homemade meat of your choosing – crispy fried chicken, juicy sweet ham or tender roast beef – and then a selection of three sides. A roll and dessert are usually included as well. All this is served in a relaxed, downhome atmosphere.

Join National Day Calendar as we explore Alabama’s rich history and remarkable landscapes. Get to know their people, culture and uncover the hidden places of Alabama! Use #NationalAlabamaDay to share on social media.

In a medium saucepan, cook evaporated milk, sugar, and salt over low heat for 5 minutes.

Pour into a buttered baking dish and let cool.

The 2020 National Day WALL Calendar inventory is depleting fast!  Give it as a gift or use it yourself for planning gatherings.  Also the best office calendar for planning meetings and social media posting.

Take advantage of our BUY ONE, then we DONATE ONE to your favorite teacher, firefighter, etc.