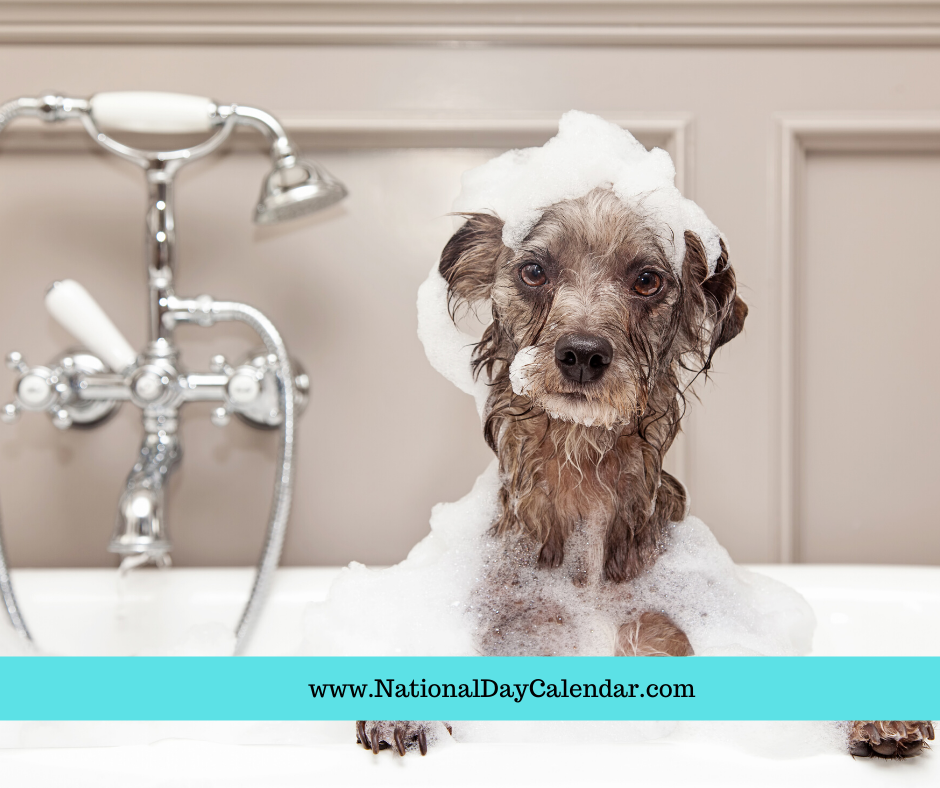 Three canine companions with personality traits as different as the seasons occupy our home. They were all born within six months of each other, and the oldest will turn four in June.

As you can imagine, fur-bearing creatures also shed fur. Shedding is as varied as their personalities, too. However, it takes on a whole new meaning as spring nears.

Now, my husband and I set out to have a two-dog lifestyle. Dog number three arrived last summer on a long-term temporary basis that seems to have no end. But more about that later.

With not two, but three dogs, fur maintenance requires a certain amount of diligence and attention. It also requires acceptance. Acceptance similar to a new mother realizing she will never sleep again or wear a pressed, stain-free blouse again. Never.

I have accepted that I will never again conquer fur. When I think I’ve swept the last hair into the bin, five more show up. After I’ve vacuumed the sofa, it grows a whole new crop. We replaced all the carpets with hardwood, and own an outstanding vacuum. I vacuum three days a week and dust mop daily. But alas, the fur wins.

God, grant me the serenity to accept the fur I cannot collect, the courage to conquer the fur I can gather, and the wisdom to know the difference.

Along with daily cleaning, part of the mission is taking care of the animal. With three dogs, grooming is critical.

Today, I set forth to bathe all three dogs. I started with Booker. Booker is best described as a miniature mountain goat who needs to cut back on his caffeine intake. Add to that his dislike for damp grass and his proclivity for allergies, he might come across as an adorable, nervous nerd.

He’s a pure-bred Jack Russell Terrier, which explains a lot of his behavior and energy. As the middle child in our canine family, Booker will turn four in December. Despite his nervousness, he doesn’t shed nearly as much as the other two. However, his hair is coarse and grows longer over time, necessitating a haircut before bathing.

While Booker generally tolerates the trim, he does leave my makeshift hair solon somewhat lopsided. Paige, our oldest dog, observes cautiously nestled in the corner of the sofa with her amber eyes lined in kohl. They give her an exotic, Egyptian look. She knows what’s coming when Booker gets a haircut, and she’s never too sure whether she’s thrilled or not.

As I finish up Booker’s trim and give him a treat, Paige lifts her head with interest. Food is her favorite thing. Ever. I rub Booker’s face and give him some praise, comparing, not for the first time, the stark contrast of his pink-lined mahogany eyes.

Bath time. With the trim over, Booker doesn’t care what happens next. Or so he thinks. He will follow me anywhere. And he does. Right to the bathroom. His bath never takes long. And if he were the right weight, he’d look like a rat when wet. However, he’s overweight, thanks to Scott’s generosity at feeding time. Not too overweight, but I do get chastised every time we go to the vet.

Tub time is quick. Warm water, suds up, rub down, rinse off. The big trick is getting Booker out of the tub and under the towel before the big shake. I’ve gotten pretty good at this. He loves to roll around in the towel and get the big rub down. The final step is a nice, warm blow dry.

Booker’s coat is thin, so it doesn’t take long. But he’s like an 8-year-old boy who’d rather go out and play. He just got a haircut (by his mom, no less), and he’s over this bath time routine. Before I’m halfway done, he’s ready to escape. But he’s also the one who is more susceptible to illness. He must be completely dry before I release him.

I talk to him more than the other dogs. Booker responds to a soothing voice and looks you right in the eye, searching for the meaning to your words. Of course, he’s also the same dog who used all the patio furniture as lily pads avoiding the puddles of slush when all the snow and ice began to melt and then wanted to be rescued when he couldn’t find a way back across.

Finally, he’s dry, and I release him. Paige and Jackson greet him with barks and growls as if judging him by his new cut. Telling him, he smells funny.

Paige is next, and as I come out, she looks at me with sad eyes. I grab a pocketful of treats so that she sees me. I spend a few minutes brushing her, but Paige is not the real culprit of our shedding issue, either. Though, she will be, sure enough.

Even with treats, Paige does not follow me gleefully into the bathroom. She’s used to being in charge of her pack, and being in the bathroom, she clearly will not be the one running the show.

Once we’re settled, and the bath is filled, I have to do all the work. There’s no cooperation from Paige. She’s about 15 pounds heavier than Booker and dense. While she’s not resistant, Paige is most passive about the whole process. It’s as if she took a protest class or something. I place her front paws into the tub first and lift her backside over.

She stands in the warm water with her head up, full of pride. Paige won’t even look at me. It’s as if I’m stripping her of all her dignity. I’ve crossed some line, woman to woman.

As I spray the warm water onto her thick fur, it beads up and immediately off. She’s a mixed breed, but somewhere in there is a water breed meant to take to the lakes and hunt ducks and geese. Of course, I’m not surprised. Paige splashes in puddles and rolls in mud as often as Booker avoids them. I massage the water into her fur. She has a fine undercoat that keeps her warm, and it absorbs the water quickly, doubling Paige’s weight.

It takes me longer to soap Paige up and rinse her off. Her fur grows close together, and the absorbent underfur doesn’t want to release the water. Running my hands over her body after the final rinse, I squeegee the water from her body over and over. To Paige, this feels like a massage, and she begins to relax. So much so, she sits in the remaining water draining from the tub.

Satisfied, I wrap her in a towel, and she leaps from the tub to an immediate shake. I’m only a little damp, but what does it matter. I have one more dog to wash, and he’s twice the size as Paige.

Now, drying Paige is a bit of an ordeal. Her thick fur takes much more time to dry than Booker’s, but by this point, she sees the rub down for what it is – one on one attention and unlimited petting and massage. It’s her spa day.

I don’t talk much to Paige until the very end. Her language is touch. When I do, her ears perk up, and her brows wrinkle in response. By the end of the session, the only thing I begin to worry about is an overheating blow dryer, but it makes it through.

When I give Paige her treat, she’s ready for a nap, and I’m prepared for Jackson.

Jackson. Our granddog came to live with us in June last year when my son deployed to Kuwait. I call him a Tigger without the stripes. His energy and lopiness combine for a unique Pooh-Corner adventure filled with fur.

He sheds. Somewhere in the Boxer-Rhodesian Ridgeback breeds, there is a shedding problem. I brushed him for a good thirty minutes before the bath with no end in sight to the piles of red fur he was willing to release.

Until today, I had never bathed Jackson before. I have groomed him but bathed – no. My daughter-in-law has taken him into the groomer for full-on bathing treatments, but lately, the time has been tight. Today, I took the dive.

Where Booker was eager, and Paige was passive, Jackson was resistant. The red-headed boy was full-on fearful, and so I was a bit concerned I could not pull this off. But he loves me.

And he also trusts his best bud, Booker. Wherever Booker goes, Jackson will go. So, I invited Booker to the bathroom, and sure enough, Jackson joined us. And Booker stayed in the room as encouragement for the entire bath, too.

Jackson remained regal the whole time he took his bath. His curly tail never uncurled as I sprayed him down. However, once the blow dryer came out, fear took over. Calming a wet dog is…well…a wet ordeal. I was soaked by the time I finished, but he did allow me to dry him, and since he’s twice as large as Paige, my fears about my dryer lasting returned.

Where the smaller dogs only required being dried, Jackson also required brushing while blow-drying. His continued shedding necessitated that I dry and brush and towel as I finished his grooming. By the end of his session, I was in for a bit of shock.

The fur literally flew off Jackson as I dried him. And then it settled in a fine coat on my vanity, toilet, and tub. Where I was drying him, it stuck to the wall and door. Now, after bathing the dogs, the bathroom always gets a scrub down, but fur-lined walls seemed too eclectic even for me! Every surface had dog hair, and that had never happened before.

After cleaning the bathroom, I took a shower, and while in there, a feeling of sadness came over me. I’d forgotten to give Jackson a treat after his bath. Like an unwanted foster child, I had treated him differently from my other dogs. He eats and sleeps with our other dogs. Jackson plays and cuddles with us, too. But at that very moment, I felt as if I had let him down.

After my shower, I found him and gave him a treat, though I know he didn’t understand why he was receiving it.

And despite the fur and the exhaustion, I’d do it all again.

About the Author of Canine Kind When National Day Calendar head writer, Michele Schaaf, isn’t tackling fur, she Celebrates Every Day with her family and friends. She writes about everyday life and likes to share fun and humorous ways to brighten everyone’s day.