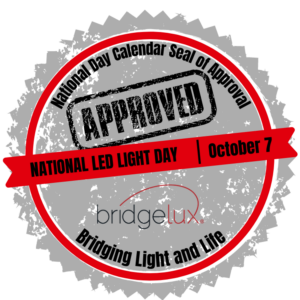 On October 7, 2014, Isamu Akasaki, Hiroshi Amano and Shuji Nakamura received the Nobel Prize in Physics for the development of blue light-emitting diodes. To understand why this was a Nobel-worthy achievement, we must know the history of LED lighting.

The earliest LEDs created in the late 1950s and early 1960s produced only a red-colored light. Slowly researchers developed other colors, but blue stumped them. Its shorter wavelength proved harder to reproduce. With Akasaki, Amano, and Nakamura’s invention, white LEDs were now possible.

Bridgelux founded National LED Light Day in May of 2016 to recognize one of the most important scientific achievements in recent history. The day also celebrates the advancements of this versatile technology.