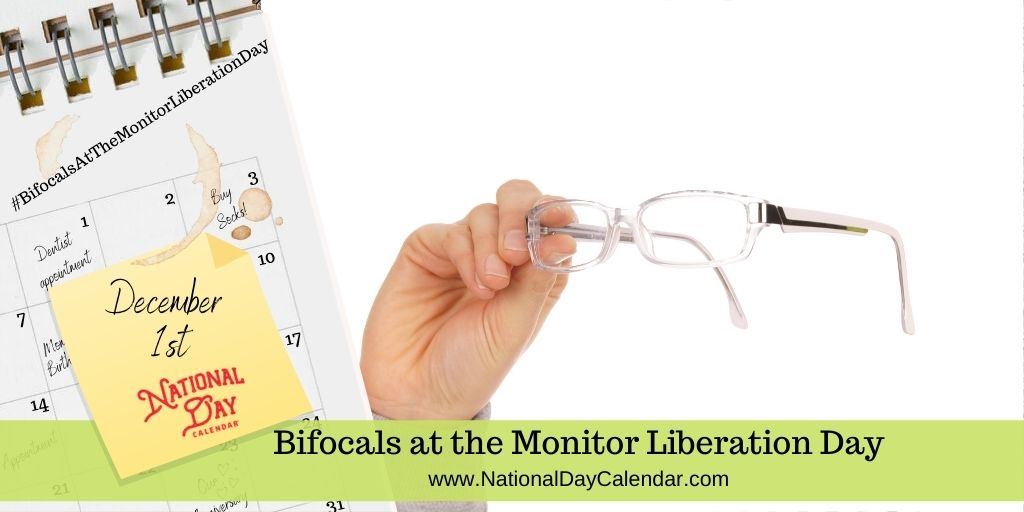 BIFOCALS AT THE MONITOR LIBERATION DAY

Each year on December 1st, Bifocals at the Monitor Liberation Day encourages you to free yourself from blurry images.

Freedom comes in the form of an eye exam. Getting your eyes checked is essential to routine eye care. Whether or not you need bifocals, our vision changes over time. Regular eye care includes more than getting glasses, too. Eye care contributes to our overall health. Deteriorating vision can be an early indicator of other health issues. Getting vision exams on a regular schedule helps doctors to identify problems in their early stages.

The day also encourages other ways to care for your eyes. For example, step away from the computer and give your eyes a break. Too much computer time tires our eyes. Make sure your settings aren’t too bright. Eliminate glare coming from a window or other light source by adjusting your screen. Adjusting font settings on your computer can also reduce strain.

Get an eye exam and see clearer. Find a vision provider near you here. If you use a computer throughout the day, be sure to incorporate breaks to give your eyes a rest. Your eyes will thank you.

Thomas and Ruth Roy at Wellcat.com created Bifocals at the Monitor Liberation Day.

December 1st Celebrated (And Not So Celebrated) History

Rosa Parks’ refused to yield her bus seat to a white passenger. Parks was arrested and civil rights leaders held a bus boycott in Montgomery, Alabama that lasted 381 days.

A rare alignment of eight planets in our solar system took place beginning on December 1st until December 8th. The planets Pluto, Mercury, Mars, Venus, Neptune, Uranus, Jupiter, and Saturn lined up for viewing. While most of the planets can be seen with the naked eye, to see them all, a telescope was necessary.

December 1st Celebrated (And Not So Celebrated) Birthdays

A member of the Oglala Lakota Sioux tribe, Black Elk witnessed the Battle of the Little Big Horn. He was a respected medicine man and was wounded during the Wounded Knee Massacre on the Pine Ridge Reservation in South Dakota.

The award-winning director, writer, and comedian is known for his high-class, self-deprecating, honest humor. Some of his films include Annie Hall, Midnight in Paris, Hannah and Her Sisters, and Irrational Man.

In the 1970s, the engineer worked for Fairchild Industries, Inc. He was a pioneer developing gaming cartridges and in 1976 the company introduced the product Lawson played a key role in developing – Fairchild Channel F. The cartridges led to versatile gaming console technology with broader concepts.