On August 20th, National Radio Day recognizes the great invention of the radio. Celebrate the news, information, music, and stories carried across the airwaves.

Several inventors participated in the invention of the radio in the late 1800s. Amazingly, not just one person can be credited with its beginning. Instead, each component developed through invention and discovery. As these technologies converged, the radio came to life.

Who invented the radio?

The paragraphs that follow describe a noted international effort that contributed to the conception of the radio. In Germany, Heinrich Hertz’s research proved electricity could be transmitted wirelessly. Elsewhere, the prolific inventor Nicola Tesla patented multiple inventions. He provided the radio with the Tesla coil. Born in Croatia, Tesla also contributed many patents involving alternating current. Not only did Tesla make the radio possible, but he also advanced the science and production of numerous other inventions. However, when it comes to the first commercially available wireless, Italian, Guglielmo Marconi receives the honor.

In radio, you have two tools. Sound and silence. ~ Ira Glass

Entertainment and music did not always fill the airwaves. In fact, the radio’s first function was much more practical. First, the wireless radio served the military. The radio also provided a regular public service role. Much like the dits and dots of a telegram, the wireless transmitted information. It also served in an emergency capacity. In 1912, a Marconi wireless broadcast the Titanic’s distress signal.

In 1906, Reginald Fessenden created the first radio broadcast of voice and music purely for entertainment purposes aired. He transmitted the program from Brant Rock, MA, for the general public to hear. The Canadian-born scientist would go on to many more successes in his lifetime.

An American contributor to the radio, Lee de Forest, invented the Audion vacuum. This invention made live broadcasting possible. Born in Iowa in 1873, de Forest would become the chief scientist for the first U.S. radio firm, American Wireless Telephone, and Telegraph.

When did the first radio stations broadcast?

The 1920s brought the first broadcast stations to the forefront. Around the world, listeners tuned in for news and world events for the first time. Other radio facts include: HOW TO OBSERVE National Radio Day

To celebrate National Radio Day, listen to your favorite radio station. Give special recognition to the station, radio personalities, and the programs that make your days better. Use #NationalRadioDay to post on social media.

Educators and families, visit the National Day Calendar Classroom for more ways to Celebrate Every Day.

We were unable to find the creator and the origin of National Radio Day. However, it is interesting to note that the first commercial radio station began broadcasting on this date in 1920. Keep reading for more history on this day.

Q. When was the first commercial radio broadcast?
A. On November 2, 1920, Westinghouse Electric and Manufacturing broadcast the voter returns for the 1920 presidential election. They broadcast out of Pittsburgh, PA, under the call sign KDKA. 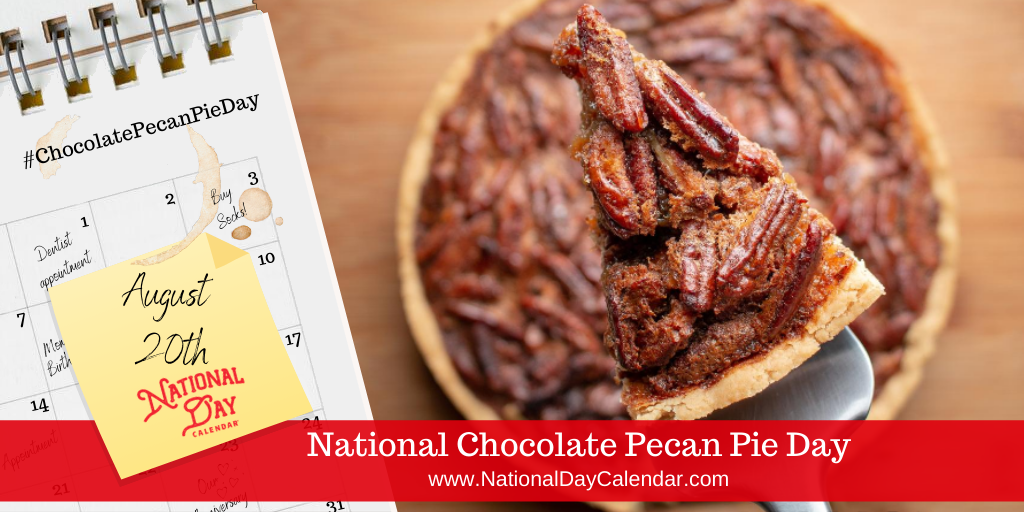 On August 20th, National Chocolate Pecan Pie Day lets you have your chocolate and pie, too! (National Pecan Pie Day is observed each year on July 12th if chocolate isn’t your flavor, but we don’t know anyone like that.)

Just like the original, chocolate pecan pie goes well with ice cream. Another southern delight, this treat features crisp pecans. Pecan pies fall under the sugar pie category which gives them a gooey, almost caramel center. Depending on the recipe, different sugars make the sweet batter for the pie. Both brown and white sugars can be used, but so can molasses. Corn syrup is a common ingredient as well. Even honey is used.

When is National Pumpkin Pie Day?

There is one ingredient that pops up from time to time that shouldn’t surprise some cooks. Some recipes call for a little bit of bourbon, rum, or whiskey. Since these spirits hail from the southern parts of North America, seasoning with them is a natural method.

While pecan pies include eggs in the recipe as a binder, it’s interesting to note another sugar pie that was made when eggs were out of season. The pie is called a sugar cream pie. Though we can’t imagine there being a season for eggs, birds lay more eggs in spring and summer than they do in the fall and winter. Chickens rely on the sun to know when to lay eggs. When the days are shorter, they lay fewer eggs. In the winter, they may lay no eggs at all.

So, on small farms when the hens stopped laying, a sugar cream pie offered an alternative since no eggs are required to make it. Both chocolate pecan pie and sugar cream are delicious!

There are so many ways to celebrate the day. Whether you visit your favorite bakery and pick up a pie or bake it yourself, be sure to share with friends and family. Experiment with a new recipe or bake up an old favorite. We even have some recipes for you to try.

Use #ChocolatePecanPieDay to post on social media. Tell your friends about this wonderful dessert. National Day Calendar also has a Recipe page filled with much more than just desserts, so have a look-see!

We were unable to find the creator of the observance.

August 20th Celebrated (and Not So Celebrated) History

Charles Darwin and Arthur Wallace both publish their theories on evolution in The Journal of the Proceedings of the Linnean Society of London.

Nearly a year after the end of hostilities, President Andrew Johnson formally declares the end of the American Civil War.

William Robinson receives patent No. 130,661 for his open circuit signaling system for railroads.

Pyotr Tchaikovsky debuts his 1812 Overture in a specially built concert hall in Moscow.

The Soviet’s Sputnik 5 with two dogs, mice, rats and plants return to Earth after a 1-day venture in space. Belka, Strelka and the other living creatures were unharmed during their voyage.

Rolling Stones release the single “(I Can’t Get No) Satisfaction” in the United Kingdom.

NASA launches Voyager II into space with a record including greetings in 60 languages as well as scientific information, music and Earth sounds.

Dwight Gooden becomes the first National League pitcher to strike out more than 200 batters in his first 2 seasons.

The Supreme Court of Canada reaches a decision regarding the legality of Quebec succeeding from Canada. After two failed referendum attempts to vote for sovereignty by the governing party, Parti Quebecois, the Canadian government brought the issue to the courts. Advertisement
August 20th Celebrated (and Not So Celebrated) Birthdays

Known as the grandfather of the United States Air Force, Lowe served Union Army during the American Civil War. His contributions to aeronautics come in the form of hydrogen balloons and other aerial tools used to spy on the Confederates.

Benjamin Harrison served as the 23rd president of the United States and the only president from the state of Indiana.

The prolific writer of horror and the bizarre never lived to see the success of his work.

Sperry’s research in the nervous system led to several breakthroughs. One included a better understanding of the optic nerves.

Writer Jacqueline Susann is best known for her novel Valley of the Dolls.

As a journalist, Chung reported on several television news shows. In 1993, she broke into the national networks when she was hired as co-anchor for CBS Evening News. Chung was the first woman to hold this role and only the second woman to anchor a major network newscast in the United States.

Before replacing Willard Scott presenting the weather and other segments on the Today show, he started with smaller venues and filling in for Scott.

The television and Broadway actor has appeared in numerous roles including Pleasantville, The Bourne film series, and The Notebook.

The film director, writer, and film producer is best known for her work on the films Grey Gardens and A Wrinkle in Time.

The versatile comedic and dramatic actor has played several starring roles since her breakthrough in Enchanted in 2007.

Do you ever wonder where people learn all about those daily popular National Days? Well, this is the place to look for November 21, 2022.
By Doug  November 20, 2022
Next