On April 14th, discover a nutritious ingredient that comes from the sea. International Laverbread Day celebrates this food with a long history made from… Read more… National Gardening Day on April 14th encourages gardeners and would-be gardeners to pick up a shovel, plant some seeds, and kick off a beautiful year of… Read more… Very few marriages end amicably. Each year on April 14th, National Ex-Spouse Day encourages those who have dissolved a marriage to forgive their former spouse and move beyond any anger or bitterness that may remain. And even those that do… Read more… Each year on April 14th, National Dolphin Day recognizes the social and intelligent mammals of the water. Dolphins are cetacean mammals that are related to whales and porpoises. They range in size from… Read more… LOOK UP AT THE SKY DAY

On April 14, Look Up at the Sky Day encourages us to admire the beauty above us. On this day we all hope for good weather and an opportunity to fill our eyes with the… Read more… Each year, National Pecan Day on April 14th celebrates one nut native to the United States. It’s also a favorite snack and ingredient across the… Read more… 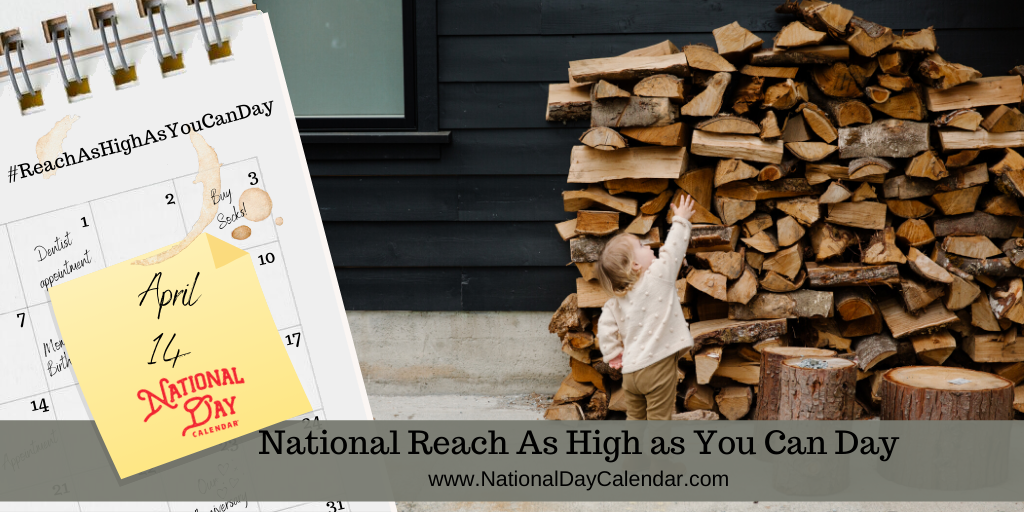 NATIONAL REACH AS HIGH AS YOU CAN DAY

National Reach as High as You Can Day on April 14th encourages us to evaluate our goals and do our best to reach them. We can define “reach” in many ways. Search… Read more… April 14th Celebrated (and Not So Celebrated) History

John Wilkes Booth assassinates President Abraham Lincoln. After shooting Lincoln in the head at Ford’s Theatre in Washington, D.C., Booth shouted “Sic semper tyrannis! (Ever thus to tyrants! The South is avenged,” and jumped from the President’s box seat to the stage, breaking his leg and fleeing the theatre.

April 14th Celebrated (and Not So Celebrated) Birthdays

The Spanish bullfighter gained a reputation as one of the greatest toreros in the early 20th century. A disability cause Belmonte to change the art of bullfighting. His legs were weak and deformed from birth, so instead of dancing and jumping away from the bull, Belmonte stood straight and motionless, drawing the bull closer. The bullfighter’s elegant use of his cape diverted the bulls away from him.

Partial blindness at a young age led Anne Sullivan to the Perkins School for the Blind in Watertown, Massachusetts. Following her graduation, the valedictorian came to work for the Keller family as governess and teacher for their daughter Helen. With Sullivan’s support, Helen learned to fingerspell, speak, and eventually attended school and college. Together they became lifelong companions and advocates for the blind and those with disabilities.

The Coal Miner’s Daughter, Loretta Lynn, found her legendary voice as a Grammy-winning singer-songwriter from Bucher Hollow, Kentucky. She was inducted into the Grand Ole Opry in 1960 and her critical acclaim would follow her for decades to come. Lynn continued making music well into the 21st century. Her last album was recorded in 2016, titled Full Circle.

Pete Rose played 23 years in Major League Baseball primarily for the Cincinnati Reds. He also played for the Philadelphia Phillies and the Montreal Expos before returning to the Reds and then continuing his career as a manager. Versatile throughout his career, Rose played infield and outfield and earned 17 calls to the All-Star roster. He also brought home three World Series championships and numerous other awards.

In 1989, allegations of Rose betting on baseball broke and started his permanent exit from baseball.