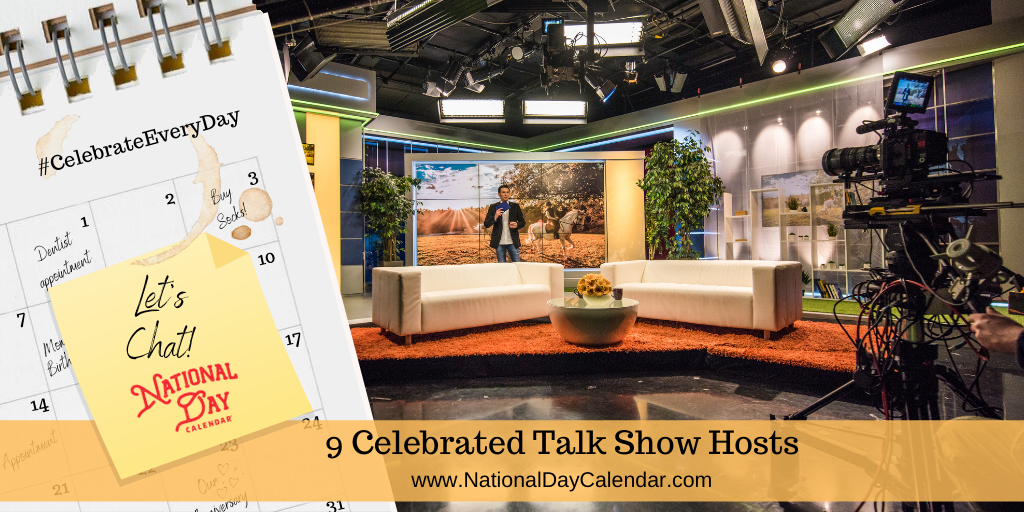 It seems like television talk shows are a fairly new phenomenon. However, the first-ever talk show aired nearly 70 years ago. The year was 1951 when most Americans were discovering television for the first time. The first-ever TV talk show host was Joe Franklin. Three years later, “The Tonight Show” made its debut with Steve Allen as the host. Since then, many television personalities became famous as talk show hosts.

We’ve listed 9 celebrated talk show hosts. Who’s your favorite? Who did we miss?

For good reason, Johnny Carson is known as, “the King of Late Night.” Carson began hosting “The Tonight Show” on October 1, 1962. The popular show featured guest interviews and musical performances. Carson hosted the final episode three decades later on May 22, 1992.

Merv Griffin is well-known for creating game shows like “Jeopardy” and “Wheel of Fortune”. Griffin also hosted game shows, but got the chance to fill in as host for “The Tonight Show”. Shortly afterward, Griffin got his own talk show. “The Merv Griffin Show” made its debut in 1965 and lasted until 1986.

Phil Donahue was the first host ever to include audience participation. “The Phil Donahue Show”, later changed to “Donahue”, began in Dayton Ohio in 1967. The show ended in New York City in 1996. As the “king of daytime talk,” Donahue is considered one of the most influential talk show hosts in history.

Before Oprah came along, Sally Jesse Raphael was the most famous female talk show host in history. Raphael was the first woman to host a syndicated talk show. She hosted “Sally,” which ran from 1983 to 2002.

“The Oprah Winfrey Show” began on September 8, 1986. “Oprah” is one of the highest-rated daytime talk shows in history. Winfrey was the first African American talk show host. She used the show for education and featured book clubs and self-improvement segments. Many star-studded guests appeared on the show. The successful show lasted 25 years and ended in 2011.

In 1992, Jay Leno took over for Johnny Carson on “The Tonight Show.” He hosted until 2009. After briefly hosting “The Jay Leno Show”, he returned to “The Tonight Show” in 2010. In 2014, he passed the show on to Jimmy Fallon. When it comes to recent talk show history, many consider Leno the most popular late-night host.

Most Americans are familiar with the morning talk show, “Live with Kelly and Ryan.” However, the popular show would not have happened if not for Regis Philbin. Known as “the hardest working man in show business”, Philbin was the first host of this talk show, which premiered as “The Morning Show” in 1983. His co-host, Cyndy Garvey was eventually replaced with Kathie Lee Gifford. Together, they co-hosted “Live! With Regis and Kathie Lee” from 1985 until 2000. The co-hosts not only got along on air, but they were also extremely close friends until Philbin passed away in 2020.